Νοεμβρίου 07, 2014
July 29, 2013, a sperm whale was stranded on Tershelling, a northern island in the Netherlands. There was a rescue attempt, but unfortunately the whale died. A young adult at 13.5 meters was taken for a necropsy at the port of Harlington. The sperm whale had plastic in its stomach, an increasing common phenomenon say researchers at the Biodiversity Centre Naturalis. In March of last year, a 10 meter long sperm whale washed up on Spain’s South Coast. This whale had swallowed 59 different plastic items totaling over 37 pounds. Most of this plastic consisted of transparent sheeting used to build greenhouses in Almeria and Grenada for the purpose of tomatoes for the European market. The rest was plastic bags, nine meters of rope, two stretches of hosepipe, two small flower pots, and a plastic spray canister. Cause of death was intestinal blockage.

These are not uncommon incidents. In 1989, a stranded sperm whale in the Lavezzi Islands in the Tyrrhenian Sea died of a stomach obstruction after accidentally ingesting plastic bags and 100 feet of plastic sheeting. In 1990, a sperm whale examined for pathology in Iceland died of an obstruction of the gut with plastic marine debris. In August of 2008, a sperm whale washed up in Point Reyes, California with 450 pounds of fishing net, rope, and plastic bags in its stomach. The California Marine Mammal Stranding Database tells of another sperm whale stranded in 2008 with stomach contents that included an extensive amount of netting from discarded fishing gear. 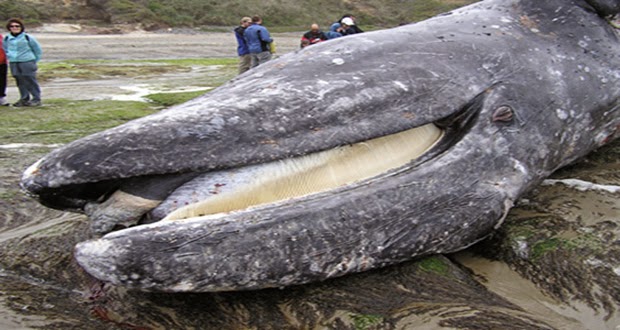 The sperm whale that stranded in the Netherlands had a large part of its lower jaw missing. Among hundreds of thousands of sperm whales that whalers harpoon, regularly encountered are sperm whales with broken or deformed lower jaws. Most of these whales have full stomachs and are healthy right before being slaughtered. This, and the fact squids are found in their stomachs whole and seldom show bite marks, lead to a theory that the lower jaw plays no significant role in catching of prey and that these sperm whales instead suck their food in. If this theory is true, sperm whales are just as vulnerable as baleen whales to the ingestion of marine debris.

Another family of deep diving, squid eating cetaceans is the beaked whales. May 2011, a female juvenile Gervais’ beaked whale was found on a beach in Puerto Rico with ten pounds of plastic in her stomach. In July 2006, a 20-year old female Cuvier’s beaked whale died in the Cook Islands, Rarotonga after ingesting a single plastic bag. Sperm whales and beaked whales are especially susceptible to swallowing plastic and fishing gear as they resemble their natural prey, squid, the same way a sea turtle is susceptible to swallowing plastic bags because they resemble jelly fish.
scientists

Baleen whales suffer the same fate, not for the fact trash resembles their food, but because they gulp large amounts of water when feeding. In August 2000, a Bryde’s whale was stranded near Cairns, Australia. The stomach was found to be tightly packed with six square meters of plastic rubbish, including supermarket bags, food packages, and fragments of trash bags. In April 2010, a gray whale that died after stranding itself on a west Seattle beach was found to have more than 20 plastic bags, small towels, surgical gloves, plastic pieces, duct tape, a pair of sweat pants, and a golf ball, not to mention other garbage contained in its stomach. 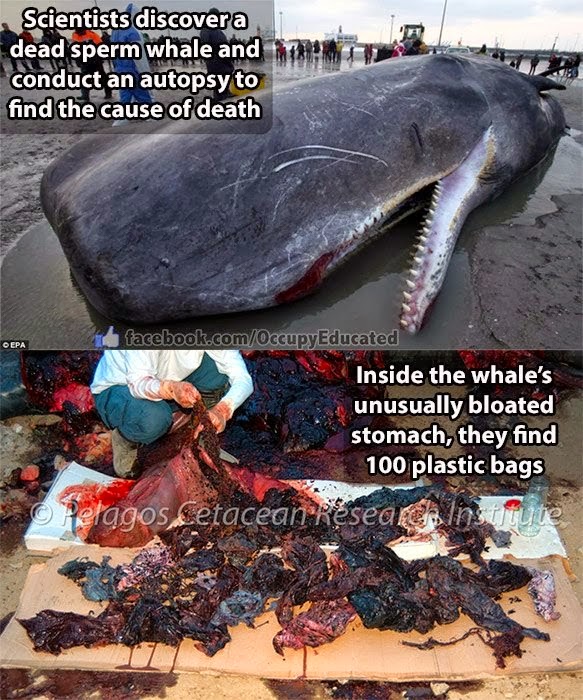